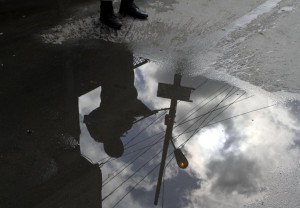 epa03625176 Indian paramilitary soldier reflected in water as he stands guard during a curfew in Srinagar, 15 March 2013. Reports state that the curfew continues on a second consecutive day in many parts of the valley after Indian paramilitary soldiers allegedly killed a civilian. Authorities say troops opened fire when a group of protesters surrounded their vehicle as they were coming back from hospital after donating blood to their injured colleagues who were injured in a suicide attack by militants on 13 March 2013. EPA/FAROOQ KHAN