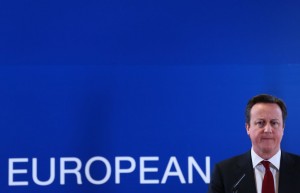 epa03625775 British Prime Minister David Cameron speaks to media during a press conference at a European Council meeting at the European Council headquarters in Brussels, Belgium, 15 March 2013. French President Francois Hollande called on the European Union to lift an arms embargo running until in May that has prevented the shipment of weapons to rebels in war-torn Syria, at talks on 14 March with his EU counterparts. Britain also has spoken in favour of providing more unequivocal support to the Syrian opposition, whereas German Chancellor Angela Merkel called for caution. The issue was added at the last minute to the leaders‘ agenda for 15 March. EPA/JULIEN WARNAND