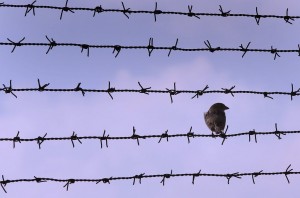 epa03631133 (25/25) A sparrow is perched on the barbed wire fence that surrounds the Jilava Penitentiary, near Bucharest, Romania, 28 February 2013. Jilava penitentiary may be one of the citys oldest, as well as most infamous, prisons, but it boasts one of the most progressive programmes of rehabilitation for its inmates thanks to a grant from Iceland, Lichtenstein and Norway through the EEA Financial Mechanism. Through this financial help the penitentiary has developed an in-house therapeutic community made up of staff members to help inmates overcome their problems with narcotics. The project at Jilava enables a maximum of 26 inmates to receive essential therapy for a period of six months  but at a cost estimated at 360,000 euros. Only inmates who have six months of detention left are eligible to participant in the programme, so long as they have not been drug dealers or convicted for either rape or murder. The drug therapy offers psychological assistance to the residents, group and art therapy and therapies organized by the Romanian anti-Drug Agency and re-integration programs. EPA/ROBERT GHEMENT PLEASE REFER TO ADVISORY NOTICE (epa03631108) FOR FULL FEATURE TEXT