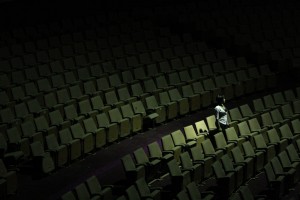 A worker stands in the abandoned auditorium of Nigeria’s National Theatre in Lagos, Nigeria, on Thursday, April 4, 2013. Nigerias iconic National Theatre, long in disrepair, is now at the center of a massive redevelopment plan that could be worth millions of dollars. Nigerias federal government has plans to use money leasing the swampy land in Lagos around the theater to private investors so they can build a mall, a five-star hotel and other amenities. However, some have doubts that the project will actually raise money for the theater. Meanwhile, the plans have already likely encouraged local officials to demolish the homes of slum dwellers living around the theater. (AP Photo/Jon Gambrell)