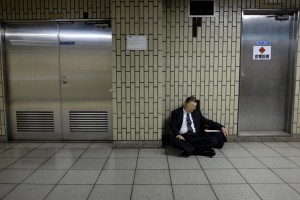 epa03668587 A Japanese man takes a nap while sitting on the floor at a subway station in Tokyo, Japan, 19 April 2013. Earlier in the day, Japanese Prime Minister Shinzo Abe announced during a press conference his strategy to boost growth in a sluggish economy. On 18 April, Japan posted a trade deficit of 3.7 billion dollars in March for the ninth consecutive month of trade loss. EPA/FRANCK ROBICHON