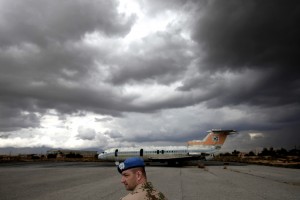 A UN soldier stands in front of a destroyed Cyprus airways plane at the war-torn UN buffer zone at the abandoned Nicosia airport in divided capital, Friday, April 19, 2012. The abandoned airport whose grounds now serve as the headquarters for the United Nations peacekeeping force, is a stark reminder of the Cypru’s decades-long ethnic division now overshadowed by the country’s severe financial crisis. The airport has remained frozen in time after being shut down in 1974 when a coup by supporters of union with Greece prompted Turkey to invade and split the island into a breakaway Turkish Cypriot north and an internationally recognized Greek Cypriot south. (AP Photo/Petros Karadjias)