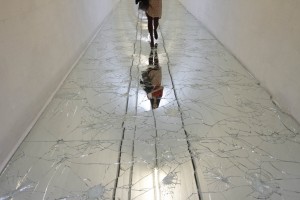 Visitor walkS on a broken mirror art installation by Italian artist Alfredo Pirri as visitors tour contemporary art displayed at the war bunker, near town of Konjic, 80 kms south of Sarajevo, Bosnia, on Friday, April 26, 2013, as the once secret bunker, built to shelter Yugoslavia’s Marshal Josip Broz Tito and the communist leadership from a nuclear war, turns for three months into one of the world’s quirkiest contemporary art galleries. The exhibition that opens Friday occupies most of the U-shaped complex some 280 meter (920 foot) deep underground that reportedly cost some US dlrs 4.6 billion to build but never served any purpose, and now turns into something that may put the sleepy Bosnian town of Konjic on the cultural map of Europe. Artists from 19 countries have worked for months on their performances and interventions in almost 100 rooms of the underground labyrinth, said Edo Hozic, the director of the project.(AP Photo/Amel Emric)