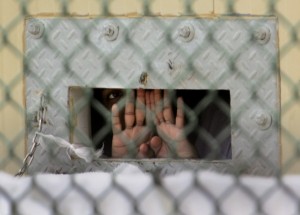 FILE – In this Dec. 4, 2006 file photo reviewed by a U.S. Dept of Defense official, a detainee shields his face as he peers out through the so-called „bean hole“ which is used to pass food and other items into detainee cells, at Camp Delta detention center, Guantanamo Bay U.S. Naval Base, Cuba. Lt. Col. Samuel House said Friday, April 26, 2013 that 97 men are now on strike, up three from the day before. He says 19 of them are receiving liquid nutrients through a nasal tube to prevent dangerous weight loss. Another five are under observation at the hospital on the U.S. base in Cuba. The hunger strike began in February 2013, with prisoners protesting conditions and their indefinite confinement. The U.S. holds 166 prisoners at Guantanamo, most without charges. (AP Photo/Brennan Llinsley)