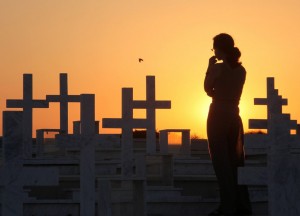 epa03793539 A woman is silhouetted as she visits the graves of Greek and Cypriot soldiers killed in the 1974 Turkish invasion of Cyprus, at the Tymvos Macedonitissas military cemetery in Nicosia, Cyprus, 19 July 2013. The 39th anniversary of the Turkish invasion will be marked on 20 July 2013, an event that lead to the subsequent occupation of the northern part of Cyprus; splitting the island into the Greek Cypriot south and Turkish Cypriot north. EPA/KATIA CHRISTODOULOU