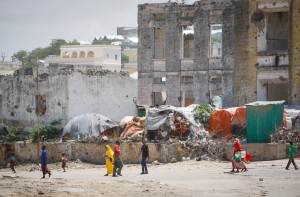 epa03814473 A handout photograph provided by the African Union-United Nations Information Support Team (AU-UN IST) on 06 August 2013 shows civilians walking past bombed-out and destroyed buildings in the Boondheere district of Mogadishu, Somalia, 05 August 2013. On 06 August it has been two years since the Al Qaeda-affiliated extremist group Al Shabaab withdrew from Mogadishu following sustained operations by forces of the Somali National Army (SNA) backed by troops of the African Union Mission in Somalia (AMISOM) to retake the city. Since the group’s departure the country’s captial has re-established itself and a sense of normality has returned. Buildings and infrastructure devastated and destroyed by two decades of conflict have been repaired; thousands of Diaspora Somalis have returned home to invest and help rebuild their nation; foreign embassies and diplomatic missions have reopened and for the first time in many years, Somalia has an internationally recognised government. EPA/STUART PRICE / AU-UN IST PHOTO / HANDOUT HANDOUT EDITORIAL USE ONLY/NO SALES