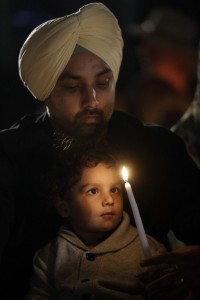 Pushpinder Singh holds his two-year-old son Prannveer during a candlelight vigil at the Sikh Temple of Wisconsin Monday, Aug. 5, 2013, in Oak Creek, Wis. Monday is the one-year anniversary of the shooting rampage when a white supremacist at the temple where six people were killed. (AP Photo/Morry Gash)