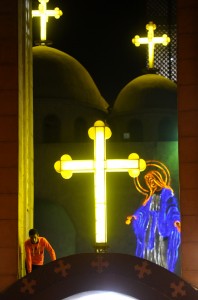 An Egyptian youth takes in the scene beneath him at a Coptic Christian church in the Waraa neighborhood of Cairo late Sunday, Oct. 20, 2013 after gunmen on motorcycles opened fire, killing a woman and wounding several people. Egypt has been on edge since a July 3 military coup ousted the country’s Islamist president. Since the coup, Coptic Christians have been killed and their churches attacked by angry mobs. (AP Photo/Mohsen Nabil)