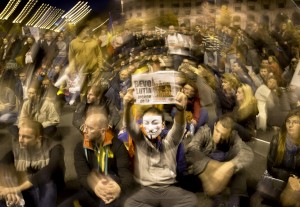 Protesters, one wearing a Guy Fawkes mask and holding a poster that reads „The revolution starts from Rosia Montana,“ sit on the pavement, blocking the traffic in front of the Romanian parliament during a protest against a Canadian gold mining project in Bucharest, Romania, Sunday, Oct. 20, 2013. Protests, joined by thousands across Romania, against a planned cyanide extraction based Canadian run gold mine supported by the government took place for the past eight weeks. The gold mine, planned to open in the Transylvanian town of Rosia Montana, would be the biggest in Europe. (AP Photo/Vadim Ghirda)