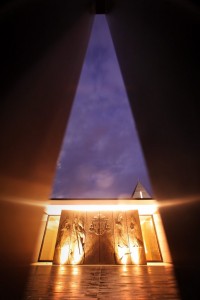 epa03917629 The entrance to the newly built chapel belonging to the still under construction new residence of the Catholic Bishop of Limburg, Tebartz-van Elst, in Limburg, Germany, 21 October 2013. The bishop is under pressure from priests and diocesan bodies to resign after revelations that the costs for his residence, next to Limburg’s cathedral, which had been projected at 5.5 million euro (7.44 million US dollar) when construction began in 2010, have now grown to at least 31 million euro. EPA/Fredrik Von Erichsen