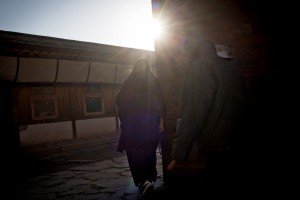 In this Thursday, Oct. 17, 2013 photo, a Tibetan monk and pilgrims circle a Buddhist temple to offer prayers near the historic Labrang Monastery in Xiahe, Gansu Province, China. By the official account, Sangay Gyatso who lit himself on fire and burned to death near a white stupa near his Gannan village, was an incorrigible thief and womanizer who was goaded into setting himself on fire in an elaborate and cruel scheme to fan up ethnic hatred. But one year after Sangay Gyatso’s self-immolation, his cousin denied the government’s account. Since early 2009, overseas Tibetan rights groups have reported that more than 120 Tibetans – monks and lay people, men and women, and young and elderly – have self-immolated in protest of Chinas suppressive rule of the Himalayan regions. (AP Photo/Andy Wong)