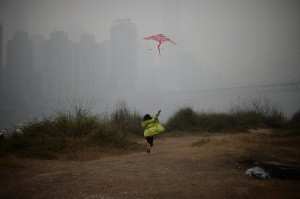 epa04098585 A picture made available 24 February 2014 shows a little girl fliying a kite on the river bank in the smog in southwest Chongqing Municipality, China, 23 February 2014. Due to smog alerts, a city in northern China has banned a fifth of residents‘ vehicles from roads, reports stated since 23 February. In Beijing, an orange alert had been issued on 21 February due to smog which is the second-highest of four levels of urgency. The Environmental Protection Ministry has sent 12 inspection teams to Beijing, Tianjin, Hebei and surrounding areas to check on compliance to measures to reduce air pollution. EPA/RAN WEN CHINA OUT