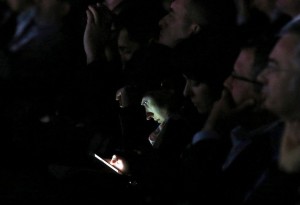 epa04098794 A woman checks her smartphone as she attends a speech by WhatsApp message app’s co-founder, Jan Koum (unseen), during a debate held in the sidelines of Mobile World Congress in Barcelona, northeastern Spain, 24 February 2014. Koum announced WhatsApp will introduce voice calls in the year’s second quarter. Mobile World Congress, the world’s most important exhibition in the mobile industry, will gather from 24 to 27 February around 1,700 exhibitors from 205 countries from around the world. EPA/ALBERTO ESTEVEZ