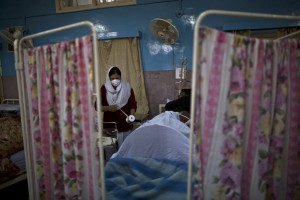 In this Sunday, Feb. 16, 2014, photo, nurse Rakhal, cleans the wounds of Pakistani patient, Zahid Rehmat, 33, who was shot by criminals while trying to rob him, at the male wards of St. Josephs Hospice, in Rawalpindi, Pakistan. Mohammed Aqeel spent weeks at home in Pakistan waiting for death after suffering a debilitating spinal cord injury in a car crash before friends suggested he come to St. Josephs Hospice on the outskirts of the capital, Islamabad. Now 13 years later, his life and those of some 40 others who live on its grounds might be changed forever as this hospital of last resort faces closure over its rising debts. (AP Photo/Muhammed Muheisen)