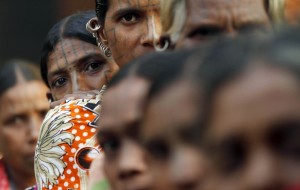 Indigenous tribal Kandha women stand in a queue to cast their votes at a polling station at Kutamgarh village in Kandhamal district, in the eastern Indian state of Orissa, Thursday, April 10, 2014. Millions of people are voting in the third phase of the elections Thursday, covering parts of 11 of India’s 28 states. The multiphase voting across the country runs until May 12, with results for the 543-seat lower house of parliament announced May 16. (AP Photo/Biswaranjan Rout)