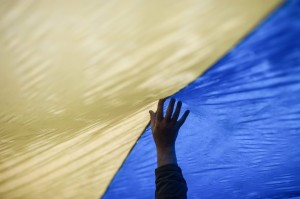 epa04170467 A Pro-Ukrainian activist attends holds up a giant Ukraine national flag a demonstration to support a united Ukraine, in Donetsk, Ukraine, 17 April 2014. Western diplomats were gathering in Geneva with representatives from Ukraine and Russia to seek de-escalation of the crisis between the two neighbours, as NATO moved to bolster its eastern defences. EPA/KONSTANTIN IVANOV