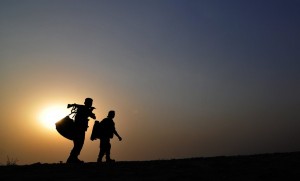 epa04177102 Indian security personnel and a polling official (C) are silhouetted against setting sun as they walk on a sandy path to reach their polling station at a remote island from Futuri in Palashbari constituency of Assam state on the eve of the third and last phase of Indian general election about 40km away from Guwahati city, India, 23 April 2014. Indian Prime Minister Manmohan Singh will cast his vote in Guwahati capital of Assam state on 24 April 2014. Parliamentary elections in India are being held in nine phases between 07 April and 12 May 2014. A total of 814.6 million people are eligible to vote – around 100 million more than in the elections in 2009 and sixth phase is due on 24 April 2014. EPA/STR