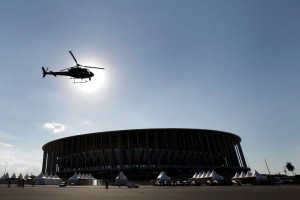 Police helicopter hovers in front of the National Stadium during a practice for security operations for the 2014 FIFA World Cup, in Brasilia, Brazil, Thursday, May 22, 2014. The football stadium is a multi-purpose arena that will host games during the 2014 FIFA World Cup soccer tournament that starts in June. (AP Photo/Eraldo Peres)