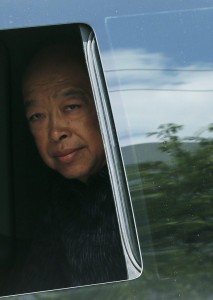 epa04220189 Thai former foreign Minister Surapong Tovichakchaikul looks out from his van as he arrives at the Army Club in Bangkok, Thailand, 23 May 2014. Thailand’s ruling junta summoned more than 100 politicians attached to the former government, protest leaders and political activists citing efforts to ‚restore peace and security.‘ The move came a day after the military declared a coup when its effort to bring rival factions together to hash out a solution to the country’s political impasse ended in failure. EPA/NARONG SANGNAK