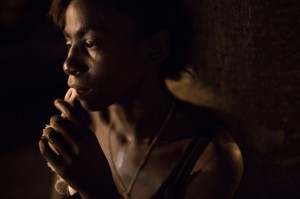 In this April 12, 2014 photo, a drug addict rests against a wall in an area known as ‚crackland‘ at the „pacified“ Jacarezinho slum in Rio de Janeiro, Brazil. After midnight, grime-covered addicts lie on the sidewalks of the Jacarezinho slum. They’re focused on little more than the next fix, on finding a lighter to put flame to pipe. (AP Photo/Felipe Dana)