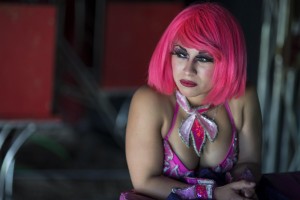 In this June 22, 2014 photo, Aineses Macias waits to perform during the Fuentes Gasca Brothers Circus in Mexico City. Like many of the performers in the circus Macias was born and raised in the circus. Recent legislation in the city will ban animals from the circus once the law takes effect next year. Many circus performers fear theyll be out of work without animals because people wont want to come to the circus only to see the acrobatic, trapeze and performances by clowns. (AP Photo/Sean Havey)