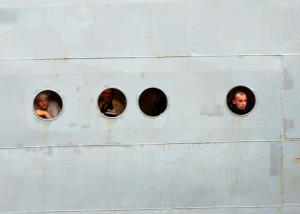 Russian sailors of the warship, the Smolniy, peer from portholes as they arrive in the harbor of St Nazaire, Western France, Monday, June 30, 2014. A Russian naval ship carrying 400 sailors has docked at a French harbor to start weeks of training aboard a warship France is selling to Russia despite widespread criticism from its allies. The warship is part of a 1.2-billion-euro ($1.6-billion) deal that marked the biggest sale ever of NATO weaponry to Moscow, raising questions both within Russia’s military circles and among France’s Western allies when it was struck in 2011(AP Photo/ Laetitia Notarianni)