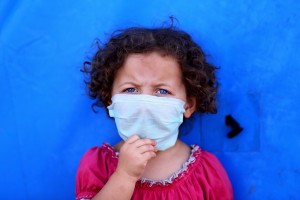 In this Sunday, June 29, 2014 photo, a displaced Iraqi girl wears a surgical mask during the first day of the Islamic holy month of Ramadan, at a camp for displaced Iraqis who fled from Mosul and other towns, in the Khazer area outside Irbil, northern Iraq. The chaotic scene underscored the fearful insecurity of displaced Iraqis as they begin Ramadan in a nation threatened by conflict and political rivalries among Shiites, Sunnis and Kurds. (AP Photo)