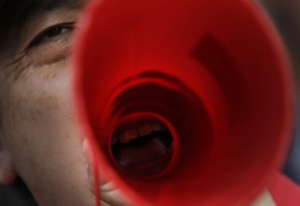 A protester shouts slogan outside the Japanese prime minister’s office as the Cabinet approved reinterpreting the constitution on military affairs. in Tokyo, Tuesday, July 1, 2014. Japan took a step away Tuesday from an American-drafted constitution that has long kept its military shackled, approving a plan to allow greater use of a force that was vanquished at the end of World War II. The banner reads: „Against cabinet decision.“ (AP Photo/Eugene Hoshiko)