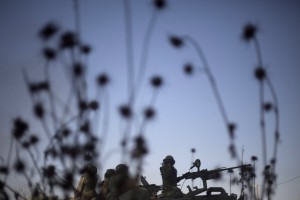 Israeli soldiers drive an armored personnel carrier to a position near Israel Gaza Border, Thursday, July 10, 2014. With rockets raining deep inside Israel, the military pummeled Palestinian targets Wednesday across the Gaza Strip and threatened a broad ground offensive, while the first diplomatic efforts to end two days of heavy fighting got underway. Egypt, which has mediated before between Israel and the Hamas militant group, said it spoke to all sides about ending the violence. U.S. Secretary of State John Kerry was in touch with Israel to try to lower tensions. And the United Nations chief warned of a „deteriorating situation … which could quickly get beyond anyone’s control.“ (AP Photo/Ariel Schalit)