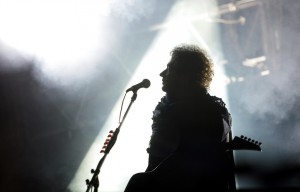 FILE – In this Oct. 19, 2007 file photo, Soda Stereo band leader Gustavo Cerati, of Argentina, performs in the first show of a nine-nation reunion tour at River Plate Stadium in Buenos Aires, Argentina. Cerati died at the age of 55 on Thursday, Sept. 4, 2014, according to the singer’s family. Cerati had been in a coma since May 15, 2010 when he suffered a stroke following a performance in Caracas, Venezuela. (AP Photo/Natacha Pisarenko, File)