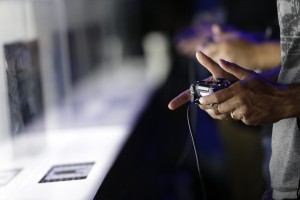 FILE – In this June 13, 2013 file photo, attendees play video games on the PlayStation 4 at the Sony booth during the Electronic Entertainment Expo in Los Angeles. The boundary between the online and physical worlds got blurry last week when Sonys PlayStation Network was disabled by an online attack, while an American Airlines passenger jet carrying a Sony executive was diverted due to a bomb threat on Twitter. Experts say thats a wakeup call for a world still coming to grips with cybersecurity: What goes down online can be equally if not more disruptive in the real world. (AP Photo/Jae C. Hong, File)