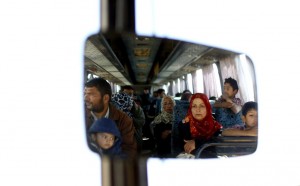 epa04424091 Syrian refugees are reflected in a mirror as they wait in a bus at the Syrian-Turkish border near Sanliurfa, Turkey, 30 September 2014. In recent days, Turkey has seen the ‚biggest influx‘ of Syrian refugees since the start of the war three years ago, a spokeswoman for the UN agency for refugees (UNHCR). The Turkish government figure includes about 140,000 people who fled Kurdish villages in northern Syria to escape an ongoing multi-pronged attack by the Islamic State militant group. EPA/SEDAT SUNA